The Surprising Power of Vulnerability in Public Speaking In every walk of life, there exists a grossly underestimated and intangible, yet supremely powerful aspect which could manifest everything one has ever dreamt of and yearned for. Never must we downgrade the power of connection.

When it comes to public speaking, vulnerability gifts a person the ability to be genuine and authentic.

For, there may be a hundred lines that could be memorized and recited out loud, crisply and flawlessly; but no message could ever impact a receiver without the establishment of a strong, heartfelt connection.

It is but natural to be afraid of making a mockery of oneself on stage. More often than not, this fear ends up getting the better of us, thereby triggering higher levels of panic and fright.

But, beyond every infirmity lies opportunity. This ostensible ‘weakness’ could actually become helpful in improving one’s performance as a public speaker and here’s how.

Benefits of being vulnerable:

1. Establishment of an Attachment:

Human beings are social animals. There is no bond stronger than the emotional connect between humans.

Thus, the nerves one feels on the public stage could work towards one’s advantage by adding an honest connect between the speaker & his audience.

Public speaking is all about the audience. Its existence and effectiveness depend on the presence and reaction of the people listening to you.

In order to command the entirety of their attention, it is so important to break the ice, which comes with the mere acknowledgement of your sentiments and vulnerable side.

3. The Paradox of Perfection:

Many a time, speakers constantly attempt to conceal their emotions and stick to a properly worded speech, making no room for error.

Paradoxically, this added pressure to seem and sound ‘perfect’ ends up worsening their performance.

Listeners are not in search of the perfect; they’re in need of the real. And this genuineness is provided by being vulnerable.

Confession of one’s true emotions automatically gives you a ‘human’ side and persona, on stage, which is a strength. After all, listeners too are human.

Additionally, by taking note of the audience’s current state of mind i.e. their vulnerability, one can deliver an exemplary performance.

That is the reason why it is essential to read the room.

The Importance of Knowing Your Audience When Delivering a Speech

We now know the power this secret weapon of vulnerability holds. It requires a great deal of mental and emotional strength, as we’re putting our emotions out there in the forefront. Thus, it is essential to now know how to seamlessly and effectively put this knowledge to use.

Using your vulnerability as a strength:

The universal answer when it comes to dealing with our shortcomings—practice. Of course, you may ask how one could ‘practice’ being vulnerable. Would that mean utterly faking it on stage? Absolutely not.

You see, for most of us, being vulnerable isn’t of second nature. It isn’t a faucet that we could automatically turn on; especially when it comes to opening up to a large number of people and/or an audience composed mostly of strangers.

We’re all different. Some of us are extroverted and love to meet and talk to new people thus, being able to access our vulnerable side quicker as compared to ambiverts and introverts, who take more time in doing so.

Additionally, introverts and those who have high levels of social anxiety find it the toughest to let out their emotions. Here’s when practice comes to play.

It starts with taking efforts on a personal level i.e., family, friends and loved ones. By starting off with small, conscious efforts to access one’s vulnerable side, one will slowly become more comfortable doing so at a larger scale as well.

It also involves a great deal of introspection, and being able to recognise what, how and why you’re feeling a particular emotion.

Related Article:  Public Speaking for Introverts: The Why, What & Who (An AZ Guide)

Being vulnerable is all about listening. It is all about understanding how you feel and giving yourself outright permission in doing so.

Listen to your mind and body, and act accordingly. Don’t expect yourself to act like anyone else, and don’t hesitate to be yourself. We’re all unique, so embrace that.

Listen to what the people you trust have to say about your presentation. Always take their suggestions in your stride; it will always lead to your betterment.

Surrendering yourself to the experience is key. Being vulnerable is a grand gesture. It takes courage to be raw and exposed, especially around so many people.

There are going to be unsuccessful attempts—that’s a part of life. But these attempts that you may even deem as ‘failures’, actually count as an unforgettable experience which further shape your skill sets.

In any creative process, it is important to completely immerse yourself in it. To be vulnerable is to be honest—to yourself, the people around you and most importantly, the experience in itself.

Being a great orator isn’t about chasing perfection and being seamless. It is about owning up to those imperfections and gaining the courage to overcome the roadblocks in your way. A good public speaker needs to believe in his, before conveying it to others.

Related Article: Take Your Mask Off- How To Be Yourself In Public Speaking

Brené Brown and The Power of Vulnerability:

“Vulnerability is the core of shame and fear, but it is also the birthplace of joy, happiness, creativity, belonging and love.”

Brené Brown is an American professor and researcher, who in 2011, delivered an incredibly powerful TED talk on the power of vulnerability.

Brown studies human connection and this talk describes the research that was undertaken by her to not only introspect and delve into the complexities of one’s mind, but also, society as a whole.

She says, “Stories are just data with a soul.” This perfectly encapsulates the relationship between the vulnerability of a speaker and his written material. After all, no matter what the event is, we’re all storytellers, and we all have something to share. Vulnerability adds soul.

One of the most important reasons why Brown’s TED Talk is one of the most popular and commonly cited materials out there, is her presentation.

Here’s how Brown’s video will help you master vulnerability when it comes to public speaking:

Brown’s opening line in itself starts with a personal event, immediately acting as an ice-breaker and forges a connection with the audience. Every little anecdote comes from a personal space, which renders more beauty to the material being spoken.

Brené Brown is an academic and qualitative researcher. Her years of work, which involve a large amount of detail, statistics, quantitative metrics and measures, were presented in a manner so crisp, refined and authentic, in this 20-minute TED Talk.

This clarity in thought, as well as presentation, comes with a sheer understanding of the audience and catering to their needs.

Brown not only talks about vulnerability, but also demonstrates this very sentiment throughout her talk, which is the reason why till today, her words have, and continue to shape minds and change courses of life.

Being genuine and honest by mentioning personal stories of visiting therapists and seeking help, she establishes a deep sense of attachment between herself and the viewer. This is the power vulnerability possesses.

You can listen to her Audiobook on the ‘Power of Vulnerability’ here:

The Power of Vulnerability (Audiobook) by Brené Brown PhD

After coming across Brown’s powerful and inspiring example, here’s a list of some of the most popular public figures in the world being completely vulnerable, which would further motivate you to embrace your emotions:

Barack Obama, who served as the 44th President of the United States of America from 2009-2017, is considered as not only one of America’s most popular Presidents, but also known for his impeccable oratory skills.

In the following video, we see a highly emotional Obama speak about his wife, Michelle. Being President, he still manages to ‘humanise’ his identity to that of a loving husband and proud father. This comes by choosing to access his vulnerable side.

Shah Rukh Khan is one of the most popular actors in the world. Throughout his career, which has spanned over three decades, he has always mentioned his humble beginnings and the struggle he went through, to reach where he is. This video is testimony to that. This automatically creates a bond with the listener.

The first lady of the United States of America from 2009-2017, Michelle Obama, serves as an inspiration for all women, worldwide. Her poignant and composed style of speaking immediately captures hearts. This is how she uses vulnerability in doing so:

Terry Crews is a figure we’re all familiar with. A popular American actor, comedian and activist, Crews delivered an emotional speech in 2018, where he spoke about his abusive childhood, trauma and shared personal experiences that moved everybody to tears. He teaches us how to love ourselves and face any obstacle that comes our way.

Vulnerability is courage. The very belief in what one has to say, and conveying that wholeheartedly is in itself an effort so valiant. The greatest of orators have put forth their vulnerability and won the hearts of millions.

History is replete with examples such as Winston Churchill & Malala Yousafzai who exemplify how the imagination of the very world can be captured and how legacies can be forged by just having downright faith in one’s abilities and placing one’s vulnerability at the forefront, rather than attempting to conceal them.

Here’s to taking the plunge. Embrace your emotions. Be yourself. 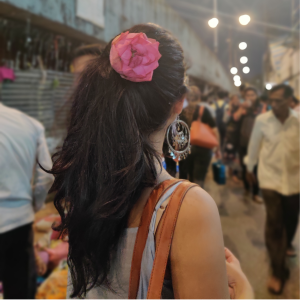